The 2018 Audi Stuart Air Show is almost here and this year’s lineup will not disappoint! These thrilling aerobatic performers will mesmerize the spectators below. Check out the impressive list of performers:

The AV-8B Harrier demonstration will consist of an 8-10-minute display of the aircraft’s capabilities, including a 90-degree climbing turn, a high-speed pass over the runway, and a vertical take-off and landing in front of the crowd. 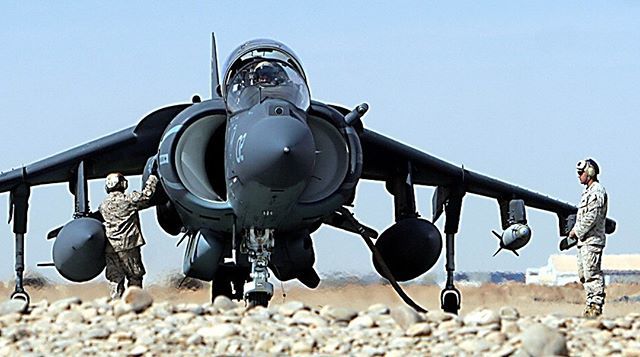 The Air Combat Command F-16 Viper Demonstration Team at Shaw AFB, S.C., performs precision aerial maneuvers to demonstrate the unique capabilities by one of the Air Force’s premier multi-role fighters, the F-16 Fighting Falcon. The team also works with the Air Force Heritage flight, exhibiting the professional qualities the Air Force develops in the people who fly, maintain and support these aircraft.

In the dark days of ages past, like-minded men of evil genius gathered to bring to this earth a creature. From the mists emerges an apparition never beheld by mortals – a creature whose power and strength will strike terror in the living hearts of all who behold it. From the depths of mad genius – from both sides of mortality – arising from a heap of forsaken souls – behold the creature Dracula!

@StuartAirShow has an in reds #performer lineup including this 😎 🐱 Franklin's Flying Circus – Official 2013 Dracula Video #1 (HR) https://t.co/asFaFoWrpw via @YouTube Get your #stuartairshow #tickets today!

The de Havilland Vampire is truly a unique and historical aircraft. Developed as the Worlds First Single Engine Jet Fighter, we, with the passage of time forget just how amazing this feat truly was. Remember, before the Vampire and the Gloster Meteors….there were no Jets, No jet engines, and no ejection seats. This was all new, and every step of the way these men were Trail Blazers. First, you had to have a motor.

Vampire Airshows mission is about the merging of Entertainment and Education. The Vampire is unique to the Airshow circuit and brings Speed, Noise, Jet Warbird Aerobatics, and a profile that grabs the audience’s attention. In the process, while Jerry “Vlad” Conley flys the aircraft his banter with the announcer always draws the crowds into learning about the aircraft. The aircraft is fully aerobatic performing rolls, Cuban eights, Shark tooths, inverted flight, high speed passes, and all with a killer smoke system. The Vampire, being the beginning of ALL modern jet aviation, is truly inspiring to watch fly.

The Phillips 66 Aerostars have been performing together, side by side at around 250 mph, for more than a decade. And while these guys are precision aerobatic pilots, they stay pretty well grounded. Like many of us, they have a passion they take very seriously: engines. Whether it’s the car they commute in, a vintage restoration project, or the engine in their beloved Extra 300L, they know how to protect them to ensure a long life. From flying high to Sunday drives, these aerobatic superstars trust Phillips 66 Lubricants to keep their world running smoothly.

Bob is one of the most versatile performers in North America, beginning his airshow career in a Salto sailplane, and over the years has continued to add innovative performances such as barnstormin’ biplane aerobatics, helicopter sailplane tow, night aerobatics with strobes & pyro and the world’s only twin jet sailplane. The tradition of innovation continues with the recent addition of the Super Salto jet sailplane, with more power, more speed and more aerobatic capability than any other sailplane on the planet!

One of the few surviving combat veteran F4U-4 Corsairs, “Korean War Hero” has a legendary history. She served two tours on two different carriers. She has the distinction of flying over 200 combat missions. Restored by Joe and Jim Tobul, this meticulously crafted Corsair now flies to remind us that the price of freedom is high, paid by those who have served to defend it.

This P-51 is a celebration of our nation’s armed forces. Every aspect of the paint represents those who have served, and those who gave the ultimate sacrifice. The black cape covering the front of the aircraft represents the veil of protection that our armed forces give us. That veil is one of the reasons why we have what we have today, freedom. As the cape extends to the back of the canopy, it spreads out and divides into feathers, symbolizing the eagle that has flown with every aviator since the birth of aviation in 1903. The black paint has tiny sparkling stars in it, each sparkle represents an American Veteran that served our great country; the unsung stars in our lives. These veterans are the glimmering star in a mother’s eye, a wife or husband’s heart, a son or daughter’s hope for the future. The silver ring behind the spinner represents the shinning halo of the guardian angel who guides service personnel, having given the ultimate sacrifice, to their final resting place. The black and white stripes on the wings are there, as they were on all allied aircraft on D-day. The stars and bars, proudly displayed, represent the armed forces symbol that all United States fighter planes carry. It carries the post war version because “Quick Silver” was never a part of a unit till after World War 2. All of the bare metal of this P-51 Mustang is polished. Look closely into the metal, you can see for whom our veterans fought.

Matt Younkin is a third-generation pilot and son of legendary airshow pilot Bobby Younkin, who is famous for his amazing aerobatic displays in the AT-6, Beech 18, Learjet 23, Samson, and most recently, the Super Decathlon. Matt learned to fly at the age of 14 from family friend Ken Collier in a Piper J-3 Cub. On his sixteenth birthday, Matt soloed his grandfather’s 1928 Travel Air 4000 biplane and to date proficient in over 80 types of airplanes ranging from the Piper Cub to the North American B-29. He is also a fully rated flight instructor and now has almost 4000 hours of total flying time and currently resides in Siloam Springs, AR.

Matt’s latest and greatest achievement is perfecting the world’s only night aerobatic display in the Beech 18. Equipped with 17 spotlights and 13 strobes, the top airplane appears to glow in the dark while the bottom side twinkles violently. Combined with smoke, noise, choreography, and an incredible musical score, the Twin Beech Night Spectacular is quickly becoming one of the most sought after acts in the airshow arena.

Rob’s rise to the top started as a young airshow fan in his native New England. Earning his pilot’s license while still a teenager, Rob began flying aerobatics almost immediately, all while building valuable flight time and experience as a corporate pilot, commuter pilot, banner tower, flight instructor, ferry pilot, and operating his own aerobatic flight school. Now in his 17th year as a full-time airshow pilot, Rob has distinguished himself by blazing a trail of innovation, developing maneuvers never before seen at an airshows. “One of my goals is to take aerobatics to the next level,” Rob explains. “I want to push the limits of what can be done.” But while his impact and influence on the airshow community is undeniable, his remarkable skills at the controls of his MXS-RH are matched with a humble and approachable demeanor that has forged a unique connection with countless fans the world over. 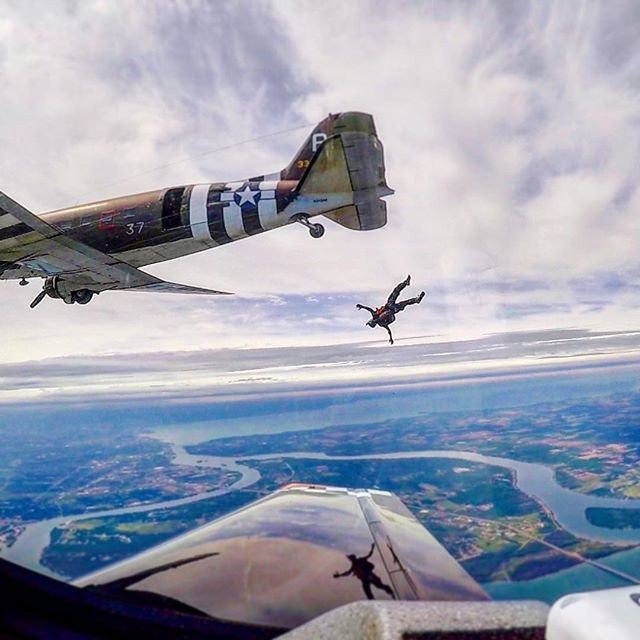 The paint scheme is what sets this airplane apart. It is unique to this airplane. I designed the scheme and painted the airplane myself. The bottom surfaces feature a 3 dimensional cube design inspired by the German WW 1 ” Lozenge ” camouflage. The face on the nose is an homage to Cole Palen, who started “The Old Rhinebeck Aerodrome” in NY. The face was on his Fokker Triplane. It was also on the Triplane of German Ace Werner Voss during WW1.

Round Canopy Parachuting Team-USA (RCPT-USA), safely performs World War Two style parachuting activities as Commemorative Airborne Operations (CAO), and conducts memorial ground services to honor Allied Paratroopers and all Veterans who fought, and many died, to defeat despotism in Europe, and around the world.

Descending from the skies at 12,500 feet, traveling nearly 120 miles per hour, free-fall parachuting is the closest humans have ever come to actually flying. For the Black Daggers, the official U.S. Army Special Operations Command Parachute Demonstration Team, that’s a typical Monday morning.

During their two-mile drop, the Black Daggers maneuver their body using their hands, arms, legs and shoulders to control their flight. At a few thousand feet, they deploy their parachutes and land with pinpoint precision, whether it’s in a football stadium or on their training grounds near Fort Bragg, N.C.

This article is sponsored by the Audi Stuart Air Show

Friday the 13th: Enigma Haunt opening for a limited number of guests

One of South Florida's premiere haunted houses wants you to help them celebrate Friday the...
Read More

How to arrange a dozen roses at home